Dr. Oz dedicated a segment to discussing genetically modified foods and the impact that they have on consumers all across the country. According to Dr. Oz, the food industry loves using genetically modified organisms because it allows them to produce more crops with a lower cost. However, it is not the natural approach, and that is where the problem lies. The lower costs might be ideal for the food industry, but these GMO’s are not natural or healthy for the body. 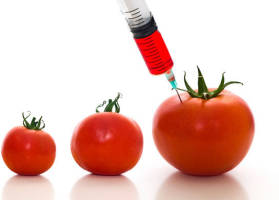 The idea behind genetically modified organisms is to use them to allow crops to grow in temperatures and climates that they would normally not be able to handle. It makes those crops more tolerable so that they can survive harsher temperatures, such as a bitter cold winter or a scorching summer. Unfortunately for the consumers, it means having foods that have not been grown natural, which has caused a major controversy.

There is now a great debate on labeling GMO foods. The consumers want to know what they are eating, but the food industry believes that should not have to include that information on their product labels. Consumers want to know which foods contain GMO. At this moment, GMO foods are mixed in with natural foods and are sold in a supermarket together with no way of telling the difference between the two. Even more shocking, about 70% of all foods sold in the grocery stores are GMO foods.

So what’s with the major concern? Dr. Oz claims that farmers who plant crops are using more pesticides to kill pests that have otherwise become immune to the original pesticides. With more pesticides being used on traditional crops, there is a risk to human health because of the toxicity in those pesticides. The increased usage could cause the human body to adjust differently, resulting in the possibility of reproductive problems as well as brain issues.

When consumers learn about this information, they agree that GMO warnings should be placed on the labels that are on food packages and containers. In fact, a total of 93% of the consumers agree to this. However, the food industry continues to fight it. They believe that the Food and Drug Administration, known as the FDA, should allow them to label their foods as natural. Some companies, such as General Mills and Post, have no problem disclosing information about any GMO foods that they might sell, and have even stated they would be willing to remove them from their products. While that is good news, there are still millions of companies that do not want to disclose such information.

The food industry continues to make claims that adding GMO warnings to their labels would increase the cost of food for the consumers. Arguments have been made, however, stating that companies are always changing the labels on their products to compete against other similar products and to gain attention, so it would not cost extra for them to add a few additional words about GMO on their labels. The food industry also believes people would stop eating foods if they noticed these labels on certain products and want to have full say about what goes on these packaged food items.

In the meantime, Dr. Oz, who is in complete support of the GMO labeling, suggests that people who want to avoid GMO should stay away from certain products, especially those made with corn, soy and papaya. He also says that stickers on fruits and vegetables can provide information on whether the product is organic or not. Products with stickers featuring a set of five numbers that begin with the number 9 are natural and organic.