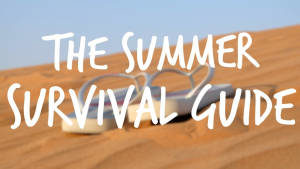 Summer is around the corner and no doubt that summertime is the best time of the year for many of us. With lots of sunshine and time outdoors, also comes along many health issues and concerns that are particularly related to summer heat. Following up on his previously undertaken survey of summertime woes, Dr Oz had assembled experts from all fields of study to help us with issues we can prevent or deal with easily without affecting much of our summer fun. This particular episode was named, ‘summer survival guide’.

Bugs were the most reported concern. David Mizejewski, a naturalist at the National Wildlife Federation graced the show and provided with important inputs about insects that sting. Most people are very bothered about stinging insects like mosquitoes, bees and wasps. He warned that killing beneficial insects around us using the “bug zapper” would increase our chances of getting more mosquitoes around. Simple tricks like just having a fan around may blow away mosquitoes since they are not very strong fliers. However, using a repellent would be more effective. He recommends using a DDT base repellent. More natural remedies like lemon-eucalyptus oil has also been found to be effective.

Interestingly, many of us would be amazed to find that bees don’t want to sting us. After the sting the bee dies, therefore, it would not want to sting unless it absolutely has to. Therefore, not going very close to what could be potentially threatening or disturbing to the bees would prevent us from an eventual “bee sting”. The same is true in case of the wasps too. However, once a sting happens, there are ways to soothe. Simple things like a piece of cold cucumber can soothe a mosquito bite or a bee sting. Calamine lotion is also effective. There are anti-histaminic drugs available over the counter that could prevent from allergic reactions to insect bites.

The second major concern is tick. Among the many misconceptions surrounding tick, the most common is that they are often thought of as insects like bees while they are arachnids and more close to spiders. The biggest misconception however is in the treatment of a tick bite. Dr Mizejewski outlined several ‘don’ts’ that included not smothering with vaseline, not rubbing with alcohol, refraining from lighting a match on it. As we all know, people do these things to kill the tick. However, the wound caused from the tick bite might get opened from these attempts to kill the tick and raise the chance of getting a Lyme disease. Ticks are sometimes carried indoors by pets, hence, using a tick repellent on the pet would prevent chances of coming in contact with ticks. However, if a tick bites, it is probably a good idea to grab a pair of tweezers and just scoop it out followed by washing with alcohol. The next step is to visit the doctor if the redness persists or a “bulls eye rash” develops.

One of the common discomforts during summer is dehydration and it is not always the heat that makes us dehydrated, said Dr Leigh Vinocur, MD and an expert in emergency medicine. Although heat exhaustion is the major cause, it could be certain blood pressure drugs like diuretics, certain physiological conditions or consumption of alcohol etc that can also make us dehydrated. Understanding the warning signs of dehydration and heat stroke would prevent it from escalating to an emergency situation. Warning signs could be excessive sweating, dizziness, nausea and finally disorientation. Immediately moving indoors in a cool place with air conditioning and using cool packs under armpits and groin in addition to drinking electrolytes can rescue from a possible heat stroke.

The most common concerns related to summer time activities do come from water. Pools contain chlorine that eliminates germs, however, the chlorine load may not be enough to kill all the germs. Also, sea water is not as safe as it is believed. Sea water could contain bacteria like E.Coli, flesh-eating streptococcus or other inorganic harmful wastes depending on the location of the beach and its proximity to industries or sewage plants etc. Therefore, it is always recommended to get a shower after our beach time or pool time. People having open wound should refrain from going to the pool or beach. She also talked about poison ivy which is considered to transmit its resins that create itchy patches on our skin. It is a misconception that poison ivy has to be touched in order to get it. Pets can also carry the resin as also our gardening tools and clothes and we may develop the itch up to seven days after getting it.

Antiperspirant sprays containing aluminium chlorohydrate is believed to prevent the resin from getting on to clothes and hence can prevent from poison ivy. Scratching is a strict “No”. Scratching will cause the affected area to get infected, therefore, oatmeal bath or over the counter antihistamines are to be used.

The often ignored but very important aspect of our summer outdoor activities is how to prevent food poisoning? Dr Oz brought in George Duran, one of the renowned Chefs to share his expertise on how to avoid common mistakes leading to dangerous food poisoning. One of the common mistake is leaving food outside after marination, in the hope that the acids in the marinade will kill any bacteria. He recommends marinating in a plastic bag pushing out all the air and always in the refrigerator. Most of us mortals are used to check our meat by poking it with our fingers, in the process transmitting germs from our hands to the food. He recommends using a thermometer. There are some thermometers that can send alarm to cell phones as well when the meat is ready. The other misconception is that warm foods do not catch bacteria. The fact of the matter is that bacteria do start to settle and grow as the temperature in those foods start to dip. Therefore, warm foods should always be kept warm by placing in a food warming tray. For cold foods, ice cushions would help them the same way.