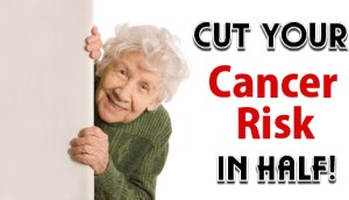 Cancer is the most dreaded disease of the modern world with more than one hundred years into cancer research, there is still no cure in sight. Although there are more cancer survivors now than even a few years back, the reason could be attributed to early detection and prevention. Cancer being a complicated disease, the search for a cure could be really hard and would not come along easily. The whole paradigm of cancer research is now shifting towards prevention rather than cure. Ground breaking findings are coming out in reputed journals that talk about simple, natural compounds having the ability to prevent cancer cells from growing. Dr Oz, in his recent show talked about three such studies and shared with audience the knowledge and tips that can be used from those studies.

Ovarian Cancer Breakthrough: A new discovery made at the Mt Curtin University in Australia sheds light on how drinking ‘tea’ can cut down on cancer risk. This study involved 1000 women from southern China, who either or not drank tea regularly, and concluded that drinking ‘Oolong’ tea (no milk or sugar added) could cut down their cancer risk by an astounding 82%. From clinical point of view, this data is not only a ‘breakthrough’, but also an eye opener on the powerful properties of natural compounds.

Dr William Li, MD and a prominent cancer researcher at the Angiogenesis Foundation was a guest on the show and he elaborated on how tea works to prevent cancer. Tea contains ‘flavonoids’ that are dietary compounds comprising almost a third of the total nutrient content of teas and chinese Oolong teas generally contain about 100-300 mg of flavonoids per serving. Among the many different kinds, the most powerful one is called EGCG belonging to the catechin group of compounds. These flavonoids are mostly abundant in green tea and Oolong teas and have been found in the lab to kill cancer cells directly. Oolong tea can be purchased online or at grocery stores and is very common. It is the tea that is typically served in Chinese restaurants.

Liver Cancer Breakthrough: This breakthrough has been reported by Italian researchers from Mario Negri Institute in Milan. Their study showed that drinking three cups of coffee (with no milk or sugar added) everyday can cut down on the risk of liver cancer by about 50%. Dr Li explained that coffee contains natural cancer fighters like caffeic acid and other antioxidants that can have a protective function on our liver. These compounds are also anti-inflammatory and anti-angiogenic, meaning they have the ability to cut down on the blood supply to the cancer cells preventing them from growing.

Dr Oz demonstrated with the help of models how these beneficial compounds in coffee can work to shrink and eliminate the few cancer cells that would have otherwise grown into an obvious tumor. Therefore, drinking coffee regularly is beneficial and in order to obtain all the benefits, there has to be a certain amount that needs to be consumed everyday. Dr Li recommends 3 cups or about 24 fl oz of coffee per day. Although it sounds like a lot, it is actually not. A large cup (20oz) or two medium cups (each 15oz) can give the same outcome. The good thing is, the active principles are also present in decaffeinated coffee as well, thus eliminating the possibility of caffeine overload.

Breast Cancer Breakthrough: The next discovery came from Harvard School of Public Health that showed that women that ate at least 2 servings of peaches per week were able to lower their risk of breast cancer by 40%. Peaches actually contain a plethora of natural compounds including antioxidants like quercetins, cyanidins and catechins that work together to prevent the growth of cancer cells. Any form of peaches: fresh, canned or frozen is good, the only thing to be remembered is, they have to be eaten without added sugar. To obtain the benefits of the cancer-fighting compounds in peaches, one has to take at least two peaches every week or 1 whole cup of canned peach.